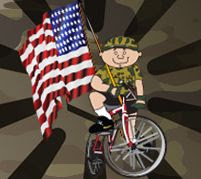 Team Little Guy is pleased to announce it is taking on a new fundraising effort! Over the past two years the team has endured 208 miles of running through the mountains of North Carolina to raise over $145,000 for the Carolinas Credit Union Foundation’s Micro Community Grant program. This year Team Little Guy is mounting their bikes to raise money for Hope for the Warriors, specifically the Warriors Hope and Care Center.
What is Hope for the Warriors? Their mission is a promise that the sacrifices of the wounded across military service branches and throughout the nation will not be forgotten, nor their needs unmet. They accomplish this mission through various programs, supported by donations, specifically designed to help wounded service members and their families cope with the struggles that most of us don’t face.
The Warriors Hope and Care Center vision is to provide a rehabilitative center with specialized services and family resources in a collocated, comforting venue. Coordinating with both the Marine Corps and the Navy, that vision led to the design of a robust rehabilitation facility that will now be built in eastern North Carolina with a level of care worthy of heroes. You can learn more about Hope for the Warriors at their website http://www.hopeforthewarriors.org/.
So what is Team Little Guy’s goal? We want to raise $100,000 by June 30, 2010 for the Warriors Hope and Care Center. To kick off our fund raising efforts we rode 170 miles in The Tour to Tanglewood on September 26-27, 2009. Throughout the rest of this year and the first half of 2010 we will be participating in biking and running events to raise awareness of our fundraising efforts and also raising awareness of credit unions “People Helping People” philosophy.
Now, 170 miles might seem like a daunting task but it is no way as daunting as when a Wounded Warrior has to learn to walk all over again with prosthetic legs because he or she was wounded in a road side bomb attack in Iraq or Afghanistan.
The $100,000 Team Little Guy hopes to raise will help to furnish the Warriors Hope & Care Center, which is scheduled to open at Camp LeJeune in 2011. Included in this facility is a planned memorial statue, which credit union funds will also help construct.
The team recognizes that times are tough, but it is our hope that by working together cooperatively these next nine months, credit unions, as well as credit union staff & members as well as all who want to make a difference across NC can work together to not only meet — but surpass — this ambitious fundraising goal.
More important than hitting a number, however, is the impact our combined contributions will have on these heroes and their families.
You’ll be finding out more information about how you & your credit union can support Hope for the Warriors and this effort very soon.
The final event will be the “Ride for the Warriors.” On June 17, 2010, Team Little Guy will begin this event at Ft. Bragg. Over the next several days they will bike to all five major military installations in North Carolina and visit credit unions on the way. Our journey will end at Camp Lejeune where we will present the check to Hope for the Warriors.
Stay tuned and visit www.teamlittleguy often for updates.
You are all the very best!
Bubba......:)
Posted by Bubba at 5:33 PM