The Power of FB--Awesome Adventure Today! 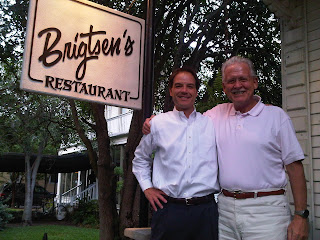 I awake form a deep sleep and see the early morning sunrise peeking thru the wooden slats on the window shades. As I pour my 1st cup of morning joe I look out over the might Mississippi and see the rising sun cast a fiery shadow across the river. A river barge is slowly slicing thru the high muddy water.

I immediately know that this was a good photo opportunity. Blackberry Bold in hand I catch the moment as it happens. Unbeknownst to me some else had just done exactly the same thing of exactly the same scene but from a different hotel room—in a different hotel.
I knew I need to share the pic with my family & friends on Facebook. A few clicks of my thumb & forefinger had the picture added for all to see on FB. I then proceeded to go about my morning routine preparing my body & soul for the day ahead.

It didn’t take long for the Berry to beep as it notified of me friends who like the picture. I soon received a message from a FB friend Natalie B. who informed me that her Dad, John B. had sent her the almost identical pic of the same scene.
Now a bit of history. When LuLu & moi moved to Winston-Salem some 20 years ago John B. was one of the very 1st serious runners I met. He and others introduced me to the great group of runners in the Twin City Track Club. We ended up buying a home in the historic Ardmore section of W-S. John & his wife Jodie along with their 1st born Natalie lived a few streets over. Heck I baby sat Natalie when they son Jack was born!
Suffice it to say, we all enjoyed a great ten years of running, partying, and travelling with the other crazies who made up a wonderful collection of TCTC people who enjoyed life to the fullest. Great years!

So after all of that John secures a wonderful new job in Spruce Pine, NC. He & the family move to Mars Hill, NC to start a new chapter in life. Between then & now we share a few phone calls & emails but distance & time take a toll on updates and sharing of smiles & beers. Paths go in divergent ways and sometimes never are to connect again. And yet sometimes they do!

I quickly fired off a response to Natalie asking her exactly when her Dad had sent the picture. She replied that was this morning within a short time of my posting. She informed me that her Dad was in New Orleans for a conference. Well hold the dam phone! I couldn’t believe it.

I quickly searched the Berry for his cell number and called. John B answered and began laughing this incredulous laugh as we discovered we are only two blocks again from each other. He told me that he was having breakfast at his hotel when he saw the sun rising over the river and snapped the pic with his cell phone & sent it to his family. Natalie soon realized that we were in the same place! Outrageous!
At 4:30 this afternoon John B and I will meet at the bar at the Sheraton hotel. We will laugh—we will howl---we will break bread & share wine together as we fill in ALL of the blanks on the most recent 10 years. Ok—so what are the odds—a gazillion to one--Outrageous!
It's 11:00pm and our day has ended---yet not ended at all---a new moment in time has happened & very special indeed!

So many things came together in the crazy Cajun cosmos this morning that allows two dear friends to cross paths again! Would never have happened without FB.
At times.. social media rocks!!
John B & Natalie----You both--Make Dust!
Let me forget Jenn at Brigtsen’s—you rock!
Posted by Bubba at 8:25 PM No comments: